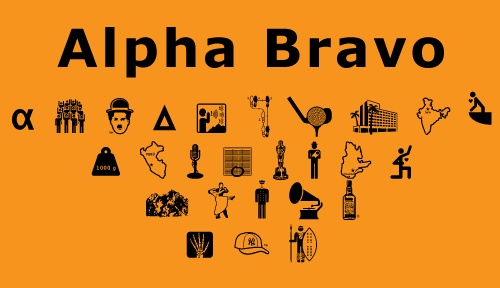 My wife has worked at a major airline for decades. For much of that time she was manning the phones in reservations, and had to regularly provide members of the public their booking reference numbers; which consisted of numbers and letters. She quickly learned the radio alphabet so people wouldn’t confuse M with N.

I thought it was a neat thing to know, and decided I should learn it as well.

I looked up the radio alphabet on the Internets, and went through it a couple of times. Once I was satisfied I’d learned it well enough, I moved on.

A couple of days later I was looking at a word, and decided to sound it out with my new super power, the radio alphabet. …blank. I couldn’t remember a single letter. Aarrgghh!

Clearly, what I needed was a learning system with a repetitive element to it. Preferably one which would keep track of which letters I got right, and which I didn’t. Some sort of flash card game, perhaps. So, I looked it up online. But there weren’t any such games to be found.

Well, I had oodles of free time on my hands (not!), so I decided to use this as an opportunity to write a single page application (SPA) in Javascript. I started with Angular and made rapid progress. Then I hit a brick wall: I couldn’t get the cursor into a newly created text field. It seemed I’d have to learn to code directives to get around this one.

I decided I was more interested in moving rapidly on this project. So I started over using straight Javascript, jQuery and Bootstrap 3.

This one went swimmingly; and on January 1st of this year (2014 for you time travelers), I launched RadioAlphabet.com.

And now you’re thinking, why did you wait over two months to announce it? Well, OK, you got me. I should have told you about it sooner. But then I thought I should tell people who’d have a real need for this. So I found a site with lists of pilot schools. Hundreds of ’em. And I got busy writing a screen scraper. And that worked. But then I just had hundreds of website URL’s, and you can’t send emails to websites. (I tried: you can’t.) So I started working on a further scraping program to harvest the emails from those sites.

That’s when my friend Glenn, who was in the screen scraping business himself at one point, tells me there are dozens, if not hundreds of email harvesting programs out there. So that’s where I’m at now. Half way between writing my own email harvester and picking one up, so I can send hundreds of emails to people about my free radio alphabet learning site.

And what have I learned from all this? I’ve learned that these little toy projects can really suck up your weekends!

6 thoughts on “Learning the Radio Alphabet”