Google is set to stand communications on its head. Again.

The soon to be released Google Wave program, web app, platform, protocol, paradigm is introducing a new way to do email, IM, forums, wikis, social networking and blogs. All-in-one. And not to put too fine a point on it, it looks pretty slick.

Not only do they have an awesome webclient to ship, but we’ll be able to integrate all that functionality into our own websites and programs using their API.

But wait! You won’t have to rely on Google’s servers: they’re making all this stuff open source, so you can host your own version of the Wave.

There’s also a very good analysis of the technology at TechCrunch.

I was dismayed, I must admit, to find a dearth of binaries when I was ready to install Subversion, the open source version control system, on Bender2, my MacBook Pro. But the journey brought me to an even better conclusion.

Meanwhile, the Subversion Downloads page references three projects offering OS X binaries. I settled on the MacPorts project because it offers a completely up-to-date version of the package. In fact, MacPorts is all about easily loading, building and installing fresh versions of over 5000 open source packages.

OK, confession time. I’ve never compiled a Linux kernel. I’m not keen to start, either. So the MacPorts solution was attractive to me. Here’s what I had to do to get there.

First, you need to install Xcode Developer Tools available from Apple’s Developer Connection. You’ll need to register, but it’s free. Once inside, go to Downloads, select Developer Tools on the right, and scroll down to Xcode 3.1.2 Developer Tools. (I’d give you a link, but I don’t think it would get you there, since its behind the login.)

Xcode is necessary because it has the GNU C++ compiler built in. This is what’s used to compile all these wonderful open source packages. Pluswhich, Xcode’s pretty cool in its own right, and I’m keen to get started playing with it.

The other prerequisite to MacPorts is the X11 windowing environment. Happily, it’s already part of Leopard.

Then you simply install the MacPorts dmg package for Leopard. They also have versions for Tiger and Panther.

Still with me? We’re almost there.

In a terminal window you issue the following command:

It will list all packages related to subversion in its library of nearly 6000 titles. You just want subversion. So you issue this command:

It’ll take a while, because MacPorts will also download, compile and install all dependencies, and there are quite a few. But it’ll get you there.

The MacPorts project also sports some very elegant documentation, which explains all the in’s and out’s of the package.

All in all, I’m very impressed with MacPorts, and extremely grateful to all the people who’ve worked so hard on it. Keep up the good work guys!

My very ingenious colleague, Sean “D-List Internet Celebrity” Carruthers, hacked his new car’s keyfob to disable its panic button when he bends over.

My solution would be to STOP BENDING OVER like that. 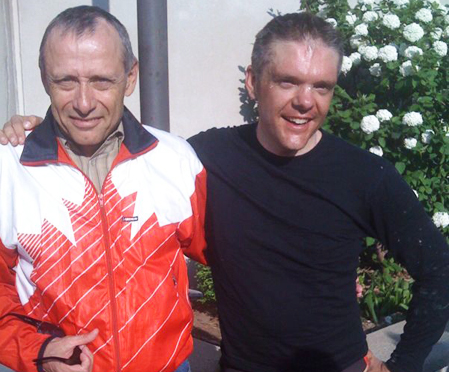 Congratulations to Ross Rader and his team!  Together they beat the cross-Ontario cycling record by 45 minutes.

Check out the cycling blog at https://ultrarider.ca/.

It’s also not too late to sponsor them and help children with cancer. Donate to the Coast to Coast Cancer Foundation.

Our favourite moron is giving $150 million to private broadcasters, but is forcing the CBC to decimate its workforce by some 800 heads.  If we had any doubts of the Harper government’s agenda to put down the CBC, they’ve now been put to rest.

I don’t know about you, but I’m livid.  Clearly Harper missed the class where they explained the difference between public organizations and private enterprises.  If the private businesses can’t make it through these tough times, I say let them die, and allow new, more agile businesses take their place.  Not only are you delaying the inevitable, but you’re squandering public moneys.

As forests need the occasinal forest fire to renew and replenish themselves, to allow newer, more vital growth to take the place of the old growth, so too does business need to make way for newer businesses, with new business models and methods.  The world is changing, and we need innovation in every facet of our country, including the boardroom.

The other point which is blatantly obvious to the public, in spite of how gullible this government might believe us to be, is that with this “grant” to the private broadcasters, they’re now indebted to Harper and his minions.  Their journalistic integrity has been compromised.  I can no longer trust their judgement.

One of the victims of the CBC’s forced cull, has been Jesse Brown and his very excellent Search Engine podcast.  But in this case the story has a happy ending: TVO has picked up the show!

You can find the feed at this URL: https://feeds.tvo.org/tvo/searchengine.

(Nota bene: I had a terrific picture of Harper eating the CBC, which I’d spent a couple of hours on with Photoshop.  But it wasn’t backed up, so I lost it with Bender the first.) 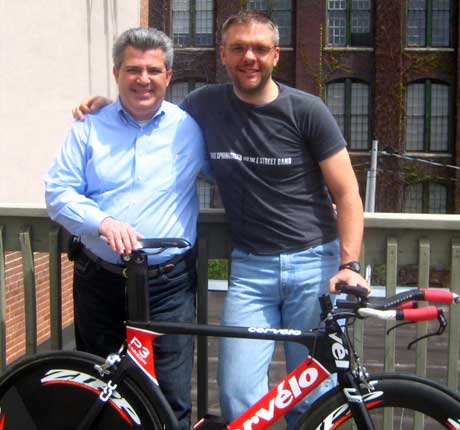 While I’ll be lapping up the WordPress goodness at WordCamp this Friday, Ross Rader, avid cyclo-fanatic and director of Tucows‘ Hover division, will be hard at work on trashing the cross-Ontario cycling record.  He’s doing this to raise awareness, and funds, for the Coast to Coast Against Cancer Foundation.

Ross will be cycling 874km, trying to beat the 1987 record set by Ron Dossenbach of Windsor, Ontario, of 35 hours and 39 minutes. He figures he’ll have to maintain an average speed of 27km/hr.

You can find Ross at his blog: https://ultrarider.ca/.

You can sponsor Ross and help a child with cancer lead a better life at: https://secure.e2rm.com/registrant/donate.aspx?EventID=28290&LangPref=en-CA.

Thanks for your support, and all the best to Ross and his team!

I missed it last year, but I’ll be there with bells on this year!  WordCamp is a series of regional conferences dedicated to our favourite blogging platform, WordPress, as well as blogging and social networking in general.