Wherein our hero (yeah, that’s me) finds his father was right (again). Has his picture taken with pr0n stars. (OK, not really.) And proves, once again (as if it really needed to be proved again) that he is an altakaker.

This past Monday, June 8th, I attended saveournet.ca‘s Town Hall on Net Neutrality at the Gladstone Hotel.

Readers of this blog will know I’m a fierce proponent of Net Neutrality. Everything about our lives will soon be finding its way to us, or from us, through the pipe: communications with our friends and family, political debate, voting, health records, pictures, interaction with governmental organizations. It’s all going to be online.

And so will businesses. Any business you may want to start. Do you want to have to pay a surtax to get better throughput on the pipes? Bell and Rogers want exactly that sort of setup. And if they get away with this, what’s to stop them from altogether cutting your access to competing services? It’s then just a hop, skip and a jump to shutting down access to political sites with which they disagree.

Don’t think it could happen in Canada? Bzzt! Too late! It’s already happened, Sparky: Telus blocked their customers’ access to a union’s community site during a strike. Can you say “censorship”?

As you can see, I’m pretty passionate about this issue, and we clearly can’t let the telcos handle this on their own because they’re not on our side, and it’s too damn important.

The standard bearer for Net Neutrality in Canada is SaveOurNet.ca, co-founded by Steve Anderson. When I heard they were having a Town Hall meeting in Toronto I immediately decided to go, for two reasons: of course, I support Net Neutrality; but I also wanted to get a straight answer from Steve regarding an email I’d received…

About a week prior I’d gotten an email from the Campaign for Democratic Media, encouraging me to help them get Al Jazeera English into Canada.

Turns out the Campaign for Democratic Media are the same guys who are running the SaveOurNet.ca campaign. So, I signed up for SaveOurNet, and they start sending me Al Jazeera propaganda. Bad form. I wrote Steve about it, but he didn’t bother answering. 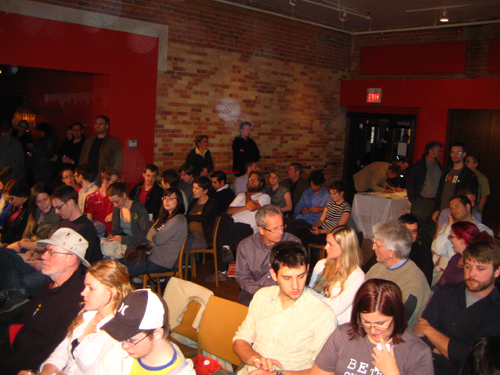 At the town hall meeting, after the panel was introduced and gave their speeches, the floor was opened to questions and comments from the audience. I was lucky(?) enough to be handed the microphone first, and asked Steve Anderson what Al Jazeera had to do with Net Neutrality. Why am I getting emails about Al Jazeera from the Campaign for Democratic Media?

He basically shut me down, saying that had nothing to do with this. Which really made my point.

Maybe 20 minutes later, Jesse Brown, who was a “special guest”, was handed the mic, and he revisited the Al Jazeera issue. He’d actually tweeted about it, and a couple of people responded saying they’d had the same experience: they signed up for SaveOurNet and received Al Jazeera propaganda.

This time Anderson gave a more considered response, because, you know, it was Jesse Brown, for Pete’s sakes. He said the SaveOurNet sign up form had a checkbox indicating you were open to receiving emails regarding other Canadian media issues. Al Jazeera fit that criteria.

Whatever, Steve. My dad warned me about this stuff. You sign a petition for one thing, and the organizers use it for something else. It ain’t right, and I’ve canceled my PayPal subscription to SaveOurNet. In addition, you’ve earned my very great disappointment.

Jesse made the same point, among others, on TVO’s Search Engine podcast. BlogTO.com went so far as to say it was confusing the issue.

But, it wasn’t all for naught. I got to meet Sass and Raymi the Minx, who seem to have this blogging thing down better than me: their reports on the evening’s festivities were out well before mine. (Sass‘s and Raymi‘s) But they do take a fine picture.

(Actually, Raymi has been accused, in the past, of posting pornographic material. I think it was tastefully done, in my opinion.)

Pluswhich, I got to meet Mark Surman, of the Mozilla Foundation.

One thought on “SaveOurNet.ca Has Lost My Support”