WARNING: You will come out of this movie hating the Disney Corporation with the red-hot intensity of a thousand suns.  (You know… if you didn’t already.)

The movie does a credible job of highlighting the greed and hypocrisy of corporations and governments telling us how we can and cannot consume and (re)create our culture.  The main thread follows mashup artist Girl Talk, who performs at high-energy concerts with his laptop, and his library of songs by other artists, as the only instrument.  There are brilliant animations, collages, snippets of scenes from other movies, television interviews, bits of news stories, Internet viral vids, and more.  All brought together as an uber mashup, bordering, at times, on the frenetic.

But more than that: the filmmakers invited Internauts to remix parts of the movie; which they then incorporated back into the movie.  It all makes for an energetic experience.

We were treated to a post-screening Q&A session with the movie’s cinematographer, Mark Ellam, and director, Brett Gaylor.  (Added bonus: I ran into Jesse Brown, host of the Search Engine podcast.)

There were a couple of things I would have done differently.  (You know, in that alternate universe where I was a filmmaker who actually got financing for an independent documentary.) 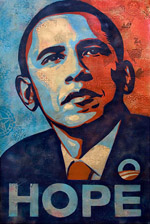 First, I’m not a huge fan of the whole remix esthetic.  Probably because I’m not up on current music in general.  I bet you I’d be keen on the stuff if they stuck to music I actually knew.

But remixes and mashups aren’t restricted to music.  You know that awesome poster of Obama?  It was done by an artist named Shepard Fairey, based on a picture taken by Mannie Garcia, for the Associated Press.  It seems the AP asked Fairey for compensation for the use of the image.  Now, keep in mind that he didn’t publish their photograph; he used it as reference for his painting.  And they not only wanted compensation, but a portion of any revenues derived from the painting as well.

This hits home for me: I’ve taken images of the web and “remixed” them with my own stuff to make new content.  All for personal consumption you understand.  But still.  (You can check them out here, and here, and here.)

Second, they had this guy in the movie.  I don’t remember his name.  Most days I’m lucky if I remember my name.  So this guy, he’s supposed to be the one who came up with the brilliant idea of America foresaking low-wage manufacturing jobs for the economy of ideas.  AKA Intellectual Property.

There’s a point in the movie where he admits it was a monumentally stupid idea to do that.

See?  I would’ve made a big deal about that.  But Gaylor just throws it in as part of the mix, and moves on.

It reminded me of Supersize Me, where the PR guy for the food industry admits that the stuff they feed kids isn’t really good for them.  And he looses his job a couple of days later.  You want to play that shit UP!

OK, last point: Gaylor does a terrific job of showing that the system is broken and corrupt, but offers no solutions.  It’s a thorny, complex issue, but many people, and some large players, have come to the conclusion that the only way out of this mess is a monthly subscription fee, entitling you to unlimited downloads.  Microsoft (G-d help us) has embraced this model, albeit in a deeply flawed way, with their Zune player.  So has Gateway.

But RiP! doesn’t address solutions.  Yet.  They may remix the whole thing at some point and add it to the mix.

It does, however, have a well formulated, four point manifesto which concisely articulates the problems with copyright:

Don’t miss this important film.  I can’t wait for it to get to DVD.